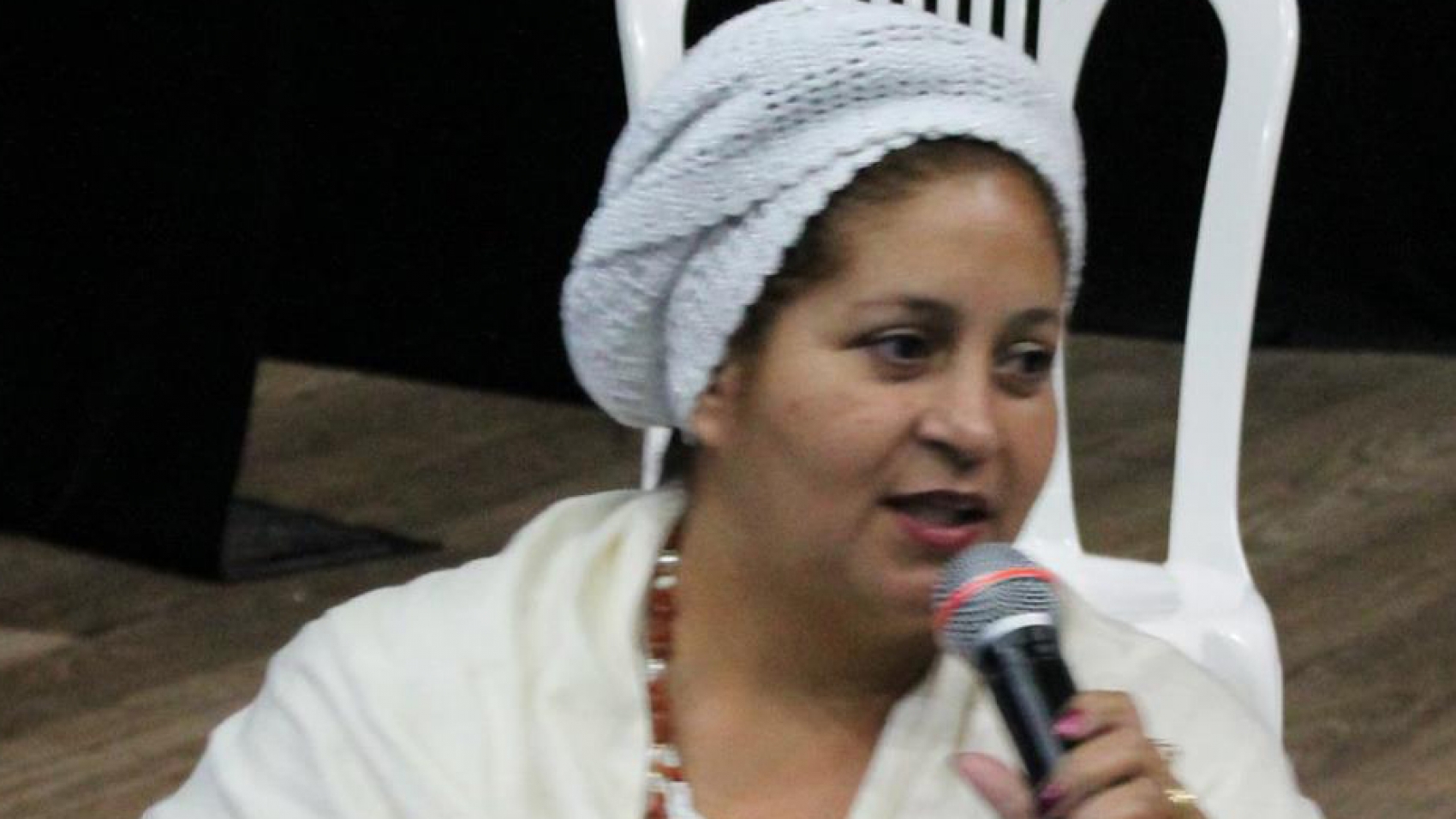 We are women who understand the world in a circular manner, where one sees the other wherever she is on the circle; however, many of us fail to deal with violence collectively. A woman might live intensely her situation of violence without dividing it with her group till the crucial moment when religious social intervention happens because we are living formula of ancestry and continuity beyond this life on earth. From this thinking, everything change as the collective intervenes in any situation of violence against women whose religiosity is of African descent tradition, such as Umbanda, Candomblé or another tradition.

We believe that our body is our temple and that everything is in balance. The body cannot suffer damage to its mental or physical health. If this happens it will hinder the fellowship with the Orishas. This is why when symptoms of violence are identified, the intervention of the religious collective happens.

Several times we are called to assist in cases of violence against our women or women who live on the surroundings of our communities. We have to be aware of the laws in order to raise questions and to assist these women on the best way possible. It is common to suffer violence due to the use of a cloth on the head or our megereguns (religious necklaces).

We have many testimonials from women who reported their ailments and pains inflicted by their husbands, lovers, parents, employers and from the society as a whole. Often, violence comes in the form of religious intolerance, racism, prejudice against various subjects and on different levels, which often lead these women to live on the margins of society, without a perspective of life. It is on this situation that the egbé (community), comes into play giving and valuing a new way of life to this woman.

In 2013, the African-Brazilian religious community suffered the death of Yalorisha Mukunby (63 years), a religious leader of African tradition, black movement activist of the city of Londrina (state of Paraná) who was killed alongside with two other relatives of her religious community: her mother, Allial de Oliveira dos Santos (86 years) and her granddaughter, Olivia Oliveira Santos, (10 years). This crime usurped the continuity of African descent tradition in that family.

We have so many reports of violence as the one of the IX National Seminar of RENAFRO (National Network of Afro-Brazilian Religions and Health) in April 2013, when a female religious leadership spoke to denounce what happens in her state (Amazonas):

2. Woman from the state of Acre is attacked at the bus stop because she wore a cloth on her head.

3. Axé House (place of worship) is victim of an anonymous false complaint of human trafficking and imprisonment (São Paulo);

We are women who live in solidarity networks, helping other women to want to have a better quality of life and to leave behind the addiction of speech and behaviour that keeps repeating that “everything will improve.”

Today, with the Maria da Penha Law, is more harmonious our intervention as religious leadership. In the case of adepts, we call the woman for a chat and accompany her to file a complaint and give all the necessary support so that she is cared for in the network of protection of African- Brazilian religions.

We know that many return to their men and withdraw their complaint, and by doing this, we no longer intervene, but monitor and assist whenever the victim wants. In our circular manner, the important thing is knowing how to handle this situation of dependence on the other and assist the victim to feel strong to start a new beginning.

We understand that the woman regardless of ethnicity, descent or experience, has the right to a better life and to the enjoyment of the constitutional laws of our country, even if today, early years of this century, we still face social vices that put women at lower levels than the males. Therefore, it is of fundamental importance for us religious leaders of African tradition, to assist on the deconstruction of these social ideas that put us as inferior to men. We are from matriarchal communities.

When the victim is black, we still have other issues of the Brazilian social psychology to deal with. There are public policies that support us, but often the Constitution itself is at the mercy of those who may wish to make a reality the decent support we deserve. The circular manner allows us to look at and help them, but we still have to talk, learn and teach kindness and loveliness to build a better world around us.

I appreciate the opportunity to share with you, ladies and gentlemen readers, our progress and difficulties on this yet controversial challenge.

[i] Iyálorixá Cristina d’Osun is the religious leader of the Ilê Asé Iyalode Oyo, Coordinator of the São Paulo Nucleous of RENAFRO and the Coordinator of the Renafro Women of Axé Working Group. She is a voluntary at the CRT Religious Assistance of the state of São Paulo.