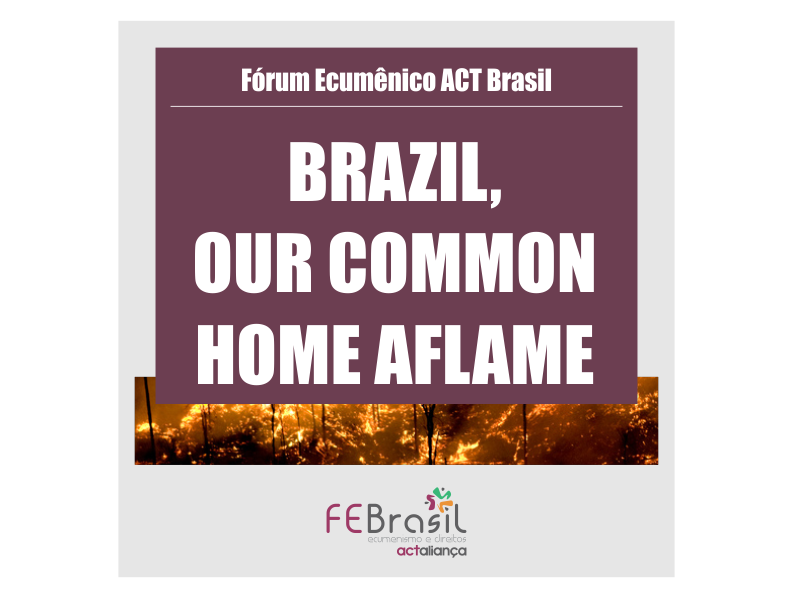 “The whole creation is eagerly waiting for God to reveal his sons and daughters […] but creation still retains the hope of being freed, like us, from its slavery to decadence”
(Romans 8:19;21)

Fórum Ecumênico ACT Brasil (FE-ACT Brasil) joins in solidarity with environmental organizations, social movements, indigenous peoples, and traditional communities to express its sorrow and deepest concern about the environmental policies of the current administration, which have led to a surge in devastation of the environment – as exemplified by the fires raging in the Amazon region – to alarming levels.

According to National Institute for Space Research (Inpe) data, the number of forest fires in Brazil from January 1 to August 19, 2019 has surged more than 80% compared to the same period in 2019. When confronted with this fact, the President of Brazil rashly and irresponsibly claimed that the fires could be “a criminal action” by “NGO people” to “call attention against the Brazilian government” and “himself”.

The president’s statement is unsurprising, given his strategy of criminalizing, delegitimizing, and seeking out mechanisms to prevent the operation of civil society organizations that uphold environmental rights. This stance is made clear by his allegation that “the fires, the way I see it, may have been boosted by NGOs, because they’ve lost money.”

Built on a foundation religious and economic fundamentalism, fake news, irresponsible opinions, and rejection of the scientific evidence, a catastrophic social and environmental scenario has arisen within the space of a few months: weakening of environmental legislation, irresponsible and unconditional subservience to the interests of mining concerns and agribusiness, baseless approval of hundreds of pesticide compounds, increased conflict in rural areas, systematic dismantling of the national system of environmental protection areas and environmental oversight, deterritorialization and violation of the rights of indigenous peoples and traditional communities, budget cuts to strategic areas, and noncompliance with international treaties and climate policies.

In response to pressure from society at large and from researchers who have worked on social and environmental issues for years, the Minister for the Environment, Ricardo Salles, claims this is “nothing more than sensationalism”.

We hold an ecumenical belief in the protection of the social and biological diversity of Creation and the defense of civil society organizations and social movements that repudiate this political project of death.