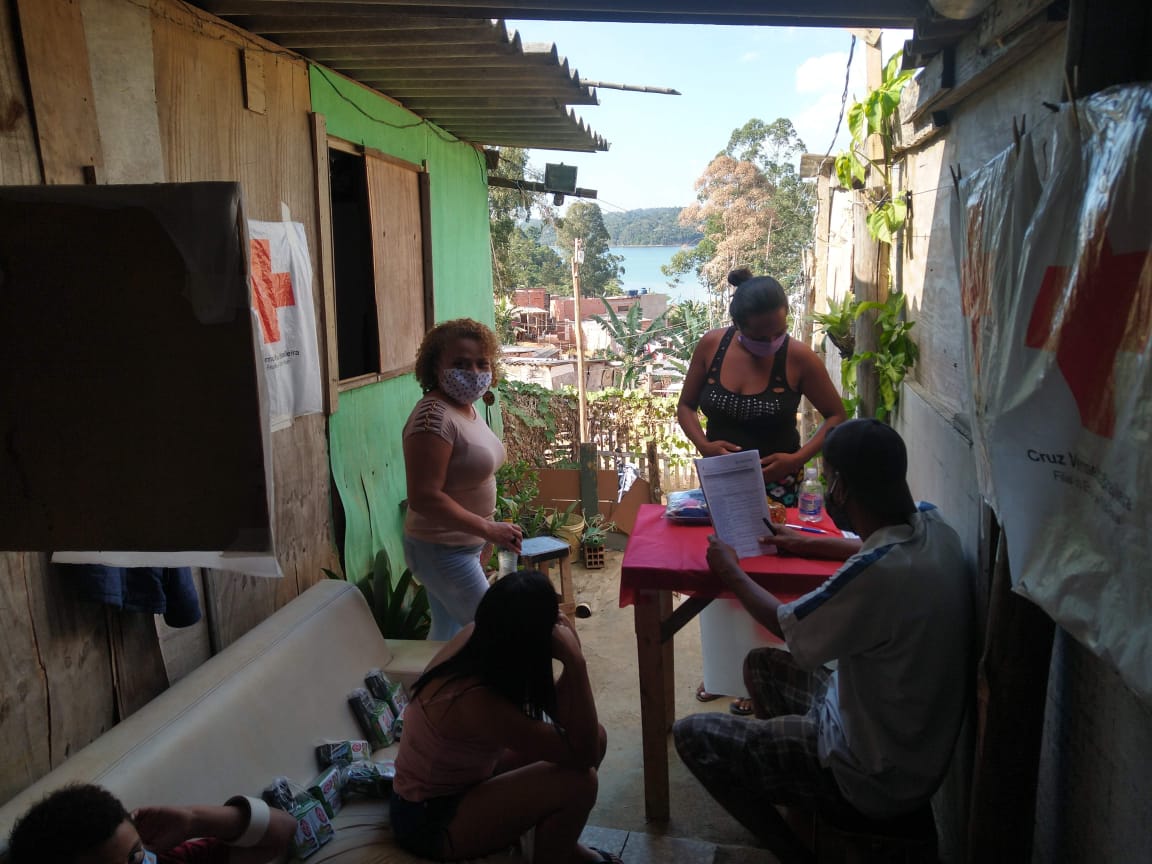 Articulation and organization with families in the south of São Paulo. Photo: MAB São Paulo

2,000 baskets with food and hygiene and cleaning items will be distributed in an action led by KOINONIA, representing the Ecumenical Forum ACT Brazil, in coordination with the MAB

About 500 families affected by floods in neighborhoods in the East and South sides of São Paulo and Baixada Santista are receiving in these three months, food baskets and hygiene and cleaning kits, on an intensified action as off the beginning of May.  The action is coordinated in local alliance with the Movement of People Affected by Dam – MAB, partner of KOINONIA, representing the Ecumenical Forum ACT Brazil¹.

Through an ACT Alliance² Emergency Fund, the activity is part of a project of solidarity and organization with families affected by recurrent floods, who are now in an even more vulnerable situation due to the COVID-19 pandemic.

The impacts are worrying and signal the need for articulations of civil society solidarity with these families, mostly headed by women.  According to research conducted in 260 favelas across the country, “Coronavirus – Mães da Favela (Mothers of the Slums)” conducted by the Locomotive Institute and Data Favela, about 5 million women live in the favelas. Each mother has an average of 2.7 children. About 70% of mothers say that food is impaired by the absence or sudden decrease in income due to social isolation. According to the survey, almost 40% of mothers living in slums are autonomous professionals, only 15% have an employment contract.

The process of mapping and dialogue with families, especially with female head of families, has been taking place since mid-March and so is the articulation of partners in each territory, social workers, health agents, social movements and local leaders of neighborhoods. Churches have also been ready to collaborate. We identified the various solidarity actions underway in the different neighborhoods, with the registration of families we identified those where aid would not arrive and places where a decentralized distribution without agglomerations would be possible.

About 2,000 baskets will be distributed in the neighborhoods: União de Vila Nova, Jardim Romero, Jardim Penha, Vila Seabra and Vila Itaim Paulista, affected by the Penha dam, East Zone; Grajaú, Pedreira, Cidade Dutra and São Luiz, nearby the Billings dam, in the South Zone; and in the neighborhood Pilões, region bordering the Cubatão river, in the city of the same name, in Baixada Santista. In addition to baskets, psychosocial support has also been done with home-to-home visits and public advocacy actions, especially in communication initiatives in this special time of confinement.

The first batch of deliveries of baskets and kits takes place in the first week of May, the next are scheduled for the end of May and June, with all the necessary safety care to avoid any exposure of volunteers and beneficiaries to the virus of COVID-19.

According to Liciane Andrioli, of the Movement of People Affected by Dam in São Paulo “at this moment with the neoliberal policies of the Bolsonaro government, thousands of people have been losing their rights, many are unemployed or living of informal economy; With the COVID-19 pandemic, the living conditions of this people become even more precarious. This solidarity action started with the floods and will also help alleviate this situation at least a little.”

Solidarity and popular organization become main weapons against the pandemic

Process of adhesive the baskets in the east and zul zones. Photos: MAB São Paulo

Organization of baskets and distribution points in the east and south. Photos: MAB São Paulo

Organization of baskets and distribution points in the east and south. Photos: MAB São Paulo

As the largest metropolis in Brazil, São Paulo faces the consequences of this when experiencing the epicenter of the coronavirus pandemic. Families who historically experience the difficulties caused by the lack of urban planning and inequalities that this entails, given the current scenario of setbacks, now experience all this in an intensified way with the arrival of the virus.

Policies that do not think of the city as part of nature, which neglect access to housing, sanitation and income distribution have favored the disorderly emerging of numerous occupations, slums and communities on the banks of dams and at-risk areas below them. The three regions where the solidarity action will act have something in common: the experience of being systematically impacted by the recurrent floods.

According to the Oswaldo Cruz Foundation, the lethality of COVID-19 is at 6.8% in Brazil, but as we also deal with the problem of case underreporting, due to inequalities in access to health and testing, this number may be 10 times higher according to FIOCRUZ. The areas most affected by COVID-19 in the city are on the outskirts, Brasilândia, North zone, e Sapopemba, East zone.

It is already proven that the virus is also excreted by feces, further compromising populations living without basic sanitation. The SOS Mata Atlântica Foundation released in March a study covering 181 stretches of rivers and bodies of water, within the perimeter of the Atlantic Forest, showing that 95% of the quality of the mineral resource is compromised.

According to IBGE, more than half of the Brazilian population does not have access to garbage collection and 34 million do not have piped water, gaping the deep abysses of inequality caused by an economic system where nature, which does not exclude human life, serves only for consumption.

MAB questions the allocation of resources and wealth generated by the dams of the South zone, Billings and Guarapiranga, the largest water reservoirs in the metropolitan region of São Paulo.

Ubiratã de Souza Dias, of MAB’s coordination team in the region points out: “the water and electricity generated by the dams are sold to the population and generate great profits for the companies that provide this service, however, we do not see this wealth that is generated here return in the form of improvements for families. Even many affected families living on the edge of the reservoir do not have access to treated water or sewage collection and treatment, a situation that we are taking into account in aid.”

¹ The Ecumenical Forum ACT Brazil consists of 23 faith-based organizations, including 7 churches. It exists for the last 18 years under this name and promotes actions for a secular and democratic State under the rule of law, in an ecumenical perspective that our planet and our cause cannot leave anyone out, all of us are part of the same future in Our Common House.

² The Forum is part of the ACT Alliance, a global coalition that brings together 151 faith-based organizations and churches, working together in more than 125 countries.

Note: Any use of image is regulated by the vulnerable children and adults safeguard policy of ACT Alliance and KOINONIA.